As many as 5,000 Scouts travel to Philmont each summer by train, making the trek to Philmont almost as exciting as the trek at Philmont.

So you can imagine the dismay in the Scouting family last year when word came out that Amtrak might be forced to shift its route away from the BSA’s New Mexico high-adventure base.

I reported at the time that if Amtrak and government leaders weren’t able to resolve their dispute, the route of Amtrak’s Southwest Chief would be moved. Instead of a stop in Raton, N.M., less than an hour from Philmont, the train would get no closer than Albuquerque, N.M., more than three hours away. That would make traveling by rail to Philmont impractical for many crews.

This week — just in time for High-Adventure Week (Coincidence? Probably.) — news broke that the U.S. Department of Transportation has awarded a $15.2 million grant to improve Amtrak’s Southwest Chief route.

In other words, Amtrak will continue service to Raton for years to come, meaning thousands more Scouts each year will experience a thrilling train adventure before their thrilling Philmont adventure.

The train’s importance to Philmont

For decades, Scouts from Chicago to Los Angeles and beyond have taken Amtrak to get to Philmont. They travel through the rugged American West before disembarking in Raton, where they’re just an hourlong bus ride from Philmont’s gates.

“Kids have been riding the train to Philmont for 75 years,” he said. “Part of that is an economic factor, yes, but it is also about the boys learning about America. Very few of these kids, about 13 or 14 years old, have ever been on a train, and they are fascinated by it.”

Communities all along the Southwest Chief route rely on the train’s presence for their livelihood. In Raton, for example, Scouts account for half the business at the station, according to the Sangre de Cristo Chronicle.

Last year, U.S. Sen. Martin Heinrich (the junior senator from New Mexico) and Amtrak CEO Joe Boardman rode the Southwest Chief to discuss the route’s past and how to preserve its future.

One of their stops was at Philmont Scout Ranch, where Heinrich (pictured here) met with BSA leaders and a troop from Iowa that rode Amtrak to Philmont.

Heinrich told the Chronicle what this route means to his fellow New Mexicans and others across the country.

“The Southwest Chief isn’t just a railroad route in New Mexico, it serves as an economic engine that connects communities from Gallup to Raton to the rest of the nation,” he told the newspaper. “These critical capital improvements will ensure that Boy Scouts from across the country can experience the Philmont Ranch and will help communities like Las Vegas and Lamy stay connected to major cities and tourism dollars.”

Scouts arrive at Philmont by a plane, train and automobile today. In 1941, though, the train was king.

Check out this page from a brochure in which Philmont — then called the Philturn Rockymountain Scoutcamp — outlined transportation options. 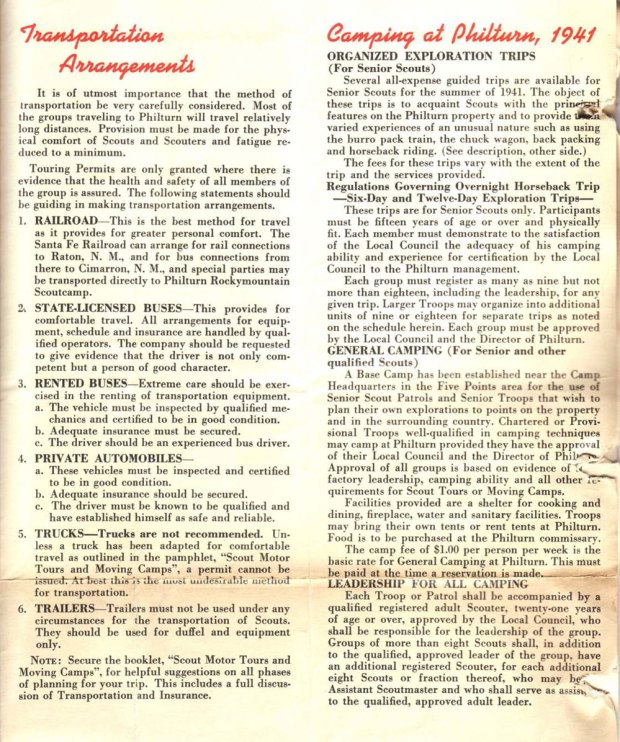 Thanks to Philmont’s Bryan Hayek for the story tip. Top photo via this blog. Secondary photo via Sen. Heinrich.

About Bryan Wendell 3240 Articles
Bryan Wendell, an Eagle Scout, is the founder of Bryan on Scouting and a contributing writer.
ADVERTISEMENT